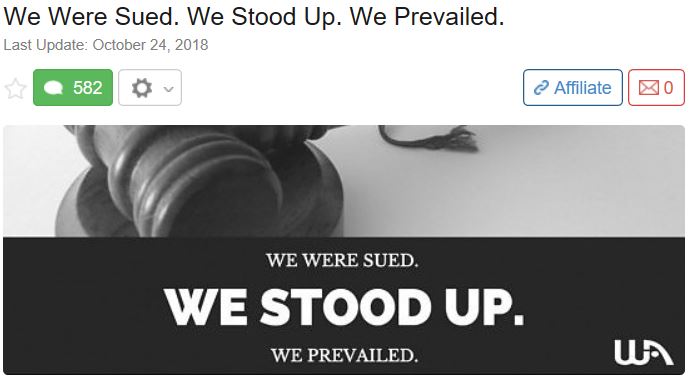 The founders of Wealthy Affiliate Kyle Loudoun and Carson Lim Donate $65.000 back to Mobe Members who have been scammed By Mobe. After Find themselves in a lawsuit stemming back from 2015. After Kyle posts, an article on his own website an article warning people of the scams online and one of them is MOBE. Going on to explain the potential risks of joining an online Scam like mobe.  Kyle and Carson the owners of Wealthy Affiliate find themselves in hot water. A court Case stemming back since 2015 and has been hanging over their heads since then.

It has finally come to the attention of Wealthy Affiliate members how they endured this for three years and how in fact they turned this whole unjustified court case back on its head and decided to donate 65.000 dollars back to those families that were scammed by Mobe. I can say I can’t imagine the suffering some of these families have endured after losing fortunes on this online scam MOBE.  Affected by Mobe you can Read More Here  FTC. Website.

Here is that original post that Kyle has just shared with all of his Members inside Wealthy Affiliate you can read that Original Post right here with a screenshot of that post. Just click on the image it will take you straight to the Original Post from Kyle Loudoun

MOBE had taken $125 million dollars from unsuspecting consumers who were just trying to find a way to make money online and better their lives, but instead, they lost thousands of dollars into this scam. Kyle who was an online blogger and co-founder of Wealthy Affiliate found himself in hot water when MOBE wanted  Kyle to remove his article. On his own Website. Refusing to back down Kyle found himself under fire and been blamed for a whole load of other posts that wasn’t his.

Always believing in themselves Kyle and Carson decided to fight this head on. Believing in the Freedom of speech. They wouldn’t be bullied by this massive company. They stood their ground. I don’t want to go into this much deeper as you can see the original post above just click on it and you can read it for yourselves.

You will learn that they were awarded only a fraction of what they had spent in this almost 3 year case but still will be donating HALF of that to the victims of MOBE in an effort to help them get back on their feet and start rebuilding what they have lost and that comes into a cool sum of 65.000 dollars.

I don’t even want to earn a commision if you sign up through this post but just the thought on how some people can try to help us online and avoid scams end up in as much deep water as the rest of us. So anyone who signs up via my link through the image above I want to give something back and that means the first month will be paid by me. I am not one to work on the back of others misfortunes also. So

That will be to the first 10 people that I see that really want to make Wealthy Affiliate work for them. Mobe was a scam used to get those people who really wanted to get ahead online. So if you join through this link I would expect a clear three months back from you. Why three months because it takes a good two to three months and more to start to see the changes happen in your online business.

You have 5 days to try it out for free if you feel its for you then I will work alongside and teach how to move forward and I will step up that first month for you for free. Those of them who have already applied as a free member cant reapply back through this link. Some countries are discounted and you can find out about them on my #1 recommendation page.

I want you to know within Wealthy Affiliate you are safe and you are free of being scammed. Working among these guys makes me feel truly honoured. Paying it forward is the way to go. If you sign up within 5 days I will pay for your first month. I will do that because I believe in this platform and like I said I don’t and won’t ride on the back of the misfortune of others.

Click on the image above to the original blog post and sign up in five days if it’s for you and I will know if it is.  I will pay your first month for free. Contact me as soon as you come to Wealthy Affiliate. Let’s make money together in an honest and a legit way. My first 10 who I think really want to get ahead online will be successful. Looking forward to seeing you there.

3 thoughts on “WEALTHY AFFILIATE OWNERS DONATE $65.000 TO THE FAMILIES SCAMMED BY MOBE !”

This site uses functional cookies and external scripts to improve your experience.

NOTE: These settings will only apply to the browser and device you are currently using.

With AdSense there is no option to opt out of cookies on a session level to display ads without serving cookies. Therefore it is not possible to display ads from AdSense if the user opts out of marketing cookies.